by Bryan Santizo and Dakota Metzger 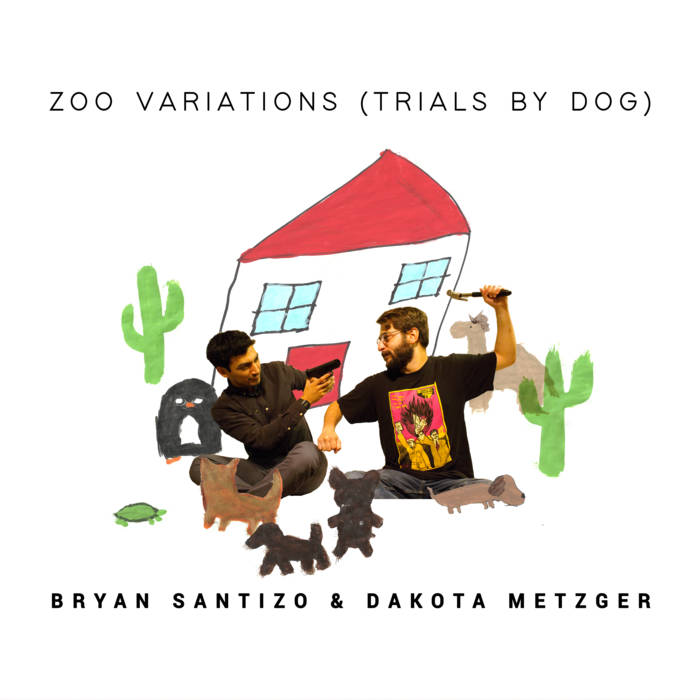 Given a recent question that I received for an upcoming interview detailing my musical career in the past ten years, I feel obligated to write something of depth and insight about this curious project. It would be a bit of a letdown not to keep up this marginal differentiation I have between my many, many, many competitors...

I have known Dakota for a number of years now and despite immediately disliking him during our first interaction at the Cedar Open Mic Night in 2016 (he had really repugnant breath and was annoyingly high out of his mind), we eventually became friends outside of the purgatorial social environment that is the music scene.

I think it's the latter that made this collaboration possible to begin with, since I have a keen distrust of anyone resembling the musician archetype, and Dakota is anything but a person desiring something grand but giving nothing in return. Once I got to know him, I found a very down to earth person, and as it turned out, a good songwriter too.

Between then and now, we would briefly and halfheartedly mention (the latter perhaps attributable only to me) that we owe it to ourselves to work together on "something". Whatever that meant, we never once identified until the final stages of this album, and ultimately was what led to this even happening to begin with. I admit now I was a bit wary of this collaboration, since I was not the most excited to be stuck in a room with someone for hours and dictate what should and should not be.

Initially we thought to just record a couple of songs we had lying around that had no real home, but, wanting to avoid just playing/writing to old songs, we wrote two songs from the ground up (“I’m Sick” and “Opportunists United”). We had a simple work flow in which we would meet once a week to rehearse the songs, record a live rough, review it, and then set out to record the “real” rhythm tracks the following week.

After doing this for a month, an opportunity arrived to record in my girlfriend’s old vacant house that was in the process of being sold. Always a fan of the sort of reflections and acoustics that come crashing from a million directions when playing drums in such an environment (something of a bookend as I hadn’t done that for 10 years since my first EP I partially recorded in my first house on Avenue P-14), I packed up all my essential studio equipment and set up base for four days.

Not only were we able to record the rhythm tracks for the majority of the songs on this record, but we ended up jamming with my brother on rhythm guitar, creating three more songs on the spot after some precision studio editing/song crafting (see the “South Bay Suite”) and having him help us out on “Opportunists United”. To add more to the productivity, I essentially recorded the entirety of the backing tracks for the upcoming Erwin Drive EP (my brother’s band) and some experiments that will probably ended up in How Scandinavian limbo.

After this sudden burst of recording, we focused on lyrics and essentially workshopped themes and ideas for a great majority of the songs. At first we wanted to write everything together, but as things dragged a little I told Dakota to take care of “Garden Grove” while I tackled “Torrance to Carson”. Once things were shaping up, we had an uneven number of songs and I quickly wrote and recorded the acoustic number “Small Message” by myself to balance the first side. This unfortunately meant that Dakota only has a small cameo in the songs’ choir of myself, but he liked the song enough as it was to not suggest much else.

I would also be remiss not to mention the couple of songs that didn’t make the cut for this record, which were two older songs that I had written both alone and with a friend. The first dates back to 2012 and we went as far as recording the backing tracks, but I felt that the song simply did not fit and will see the light of day for a HS release in 2045.

The other song has a much more interesting history, as I had written the song in collaboration with my good friend Wyatt Harman for an aborted EP. At first I thought it’d be an interesting idea to have such an old collaboration be completed in a new one, but as we reached the end of this record’s gestation I felt that it was being shoehorned and we did not get past writing lyrics for it. Although it was a shame it probably won’t ever get released, perhaps this album was a way to fulfill the spirit of working with Wyatt in January 2016 (months before I met Dakota for the first time).

As I cannot speak for Dakota’s songs, I can only comment that they are great songs and that it was a genuine compliment to be asked to interpret and write around his compositions. On “Submerged”, I tried my best to capture the raw aspects of 90’s underground music, and attempted to emulate the sound of Tortoise for “Headache” in my lead guitar, percussion, and key/vibraphone playing (but ended up closer to faux-Elliott Smith by the end).

Among the songs that I composed myself, I choose to revive a song I had written for my old band Ghost Time, in the form of “Hessian Lap”. It definitely shows its age in terms of the songwriting but it was fun and slightly bizarre to revisit. Since I never sang it in the band, I felt it would be a good idea to collaborate with Dakota to write a newer set of lyrics that are both tongue-in-cheek and a bit close to home, you can choose which are to be defined as such.

“Small Message”, as I mentioned earlier, is just a small little acoustic ditty I wrote late at night when I realized that the record needed another song. It was my attempt at writing a “creepy” folk song but I ended up scrapping that and just practiced my baritone range, therefore abusing it. Lyrically I think it speaks for itself, but it was so late at night I think I was just amused at some inane thing and wrote a response. A highlight in my catalog of filler tracks.

“Egotripping on Company Time” is probably the song I feel the most affection for and takes a very extreme motion picture lens onto a feeling of personal/professional inadequacy. I guess one could call it the sequel (or prequel?) song to “Acquaintance Now”, with the narrator years later getting what they want and in the process forgetting why they wanted it in the first place. But aside from all this scene-setting, I truly think the song speaks for itself and is arguably the most optimistic song I have written since the old days.

The more collaborative tracks in the forms of “I’m Sick”, “Opportunists United” and the entire “South Bay Suite” all qualify as highlights not only in our recording process, but on the record in general, and definitely go a long way in justifying the existence of this record to begin with in my mind. “I’m Sick” began as a need to create something energetic and exciting, and in doing so ended up with something mashing Butthole Surfers, MC Coolarge, a parody of punk/metal, and the noisier fuzzed-out parts of Blur’s 13 during the outro. It wasn’t planned, but it happened.

Creating the “South Bay Suite” took a couple days of editing 5 separate jam sessions from my girlfriend’s vacant house and creating the song structures in the studio on my own. I wanted to surprise Dakota with the results, and I think he wasn’t expecting to have such coherent songs right off the bat. While I do think that my editing was a creative catalyst (and I had to re-dub bass during a section of “Torrance to Carson” that was unsalvageable), I think the entire suite serves as testament to the musical chemistry we had between Dakota, my brother, and myself that day.

In terms of concept, Dakota and I have spoken at length about our memories of the South Bay area of California where we grew up, so I suggested creating a tribute in the form of a three movement long song collage. Where Dakota handled the lyrics of “Garden Grove”, I pretty much name-checked things I love about Torrance and Carson (and surrounding areas) and then go on a stream of consciousness tangent of discovering Harvey Danger (one of my favorite bands of all time) during a viewing of Hulk (2003) at the cheap theaters near Torrance.

During the process of recording these lyrics, I learned that my very dear old family friend, Jeff Wynton, had died of heart failure. I have many good memories of my youth in Carson and Torrance hanging out with him and my dad during and after their work hours. To say it felt like the past was ever more presently farther away seems a bit understated. Because of this, I did a final vocal take where I simply name drop him as another cherished memory of my hometown. Although I did not know it at the time of playing the song live in the room, my tribute concept to the South Bay would carry some severe personal weight.

“Opportunists United”, which is by far the most experimental track in terms of our collaborative songwriting, came about during the final session of our one-on-one writing sprees. With this song we set out to make something that had highly contrasting sections, and for some reason I felt the urge to create a verse that recalls the mood of The Police’s “Behind My Camel”, or at least that’s what I tried to do. I wanted a very murky and exotic sounding atmosphere and I think we did a good job at getting some nasty bass tones and shaky rhythms for the verses. For the choruses we wanted to go the “pop” route and ended up creating arguably the most accessible section of this entire record. Of course, I have to go and ruin it, and took a page from Idaho’s book to add an instrumental appendix that is all distorted gloom and doom. Lyrically, it is just a fictional story but we all know how life imitates art so very well. The smart people just move on, the stupid ones will only see themselves in things they are not a part of, but again they always do. Wait- is this still about “Opportunists United”?

Overall, I had a lot of fun and learned a lot in making this record with a good and talented friend. Dakota and I set out to create something substantial and personally fulfilling and I think we succeeded. Despite all the cynicism and passive-aggressive attitudes that run rampant in this stagnant environment, we allowed ourselves the freedom to make some nice music that we can laugh and reminisce about in the future. I hope the listener can hear that when they listen to this record.

All the best,
- Bryan

Recorded and produced by Bryan Santizo between July and August 2019 at two locations: The Lost Ooze and the in-escrow Sanchez House.

All music written by Bryan Santizo and Dakota Metzger except:

All lyrics written by Bryan Santizo and Dakota Metzger except: