The Second Before I Give Up EP 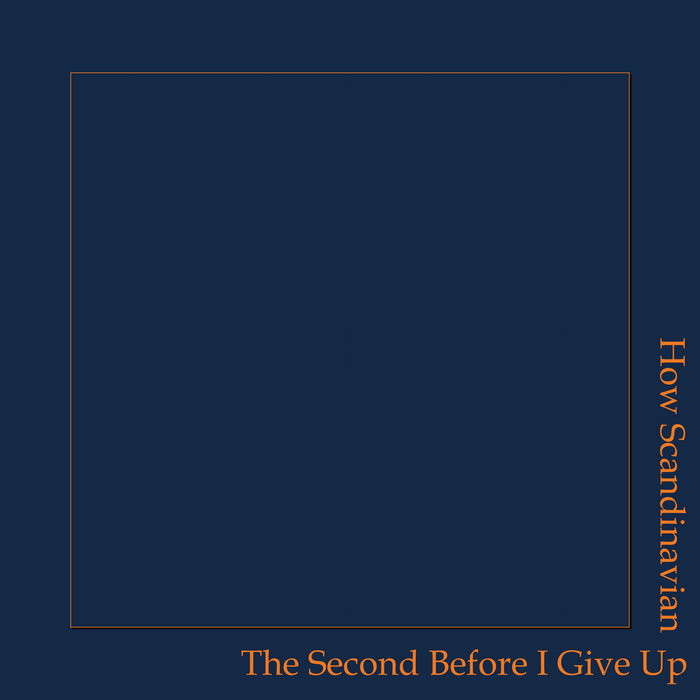 Only available for a short time after being released, The Second Before I Give Up was recorded and released in haste, partially because of my desire to release something fresh after 2010’s “Clandestine” single failed to impress. Yet, even though this initial desire had been fulfilled, the imminent release of How Scandinavian's debut LP would quickly become idealized as being my sole release of 2011.

So what seemed like “just a collection of random songs”, as a friend of mine so eloquently put it, was thrown back into oblivion to make way for the “grand artistic statement” that Dolorous was intended to be. But now in 2016, I decided to remaster and remix this lost EP in order to contextualize and reestablish it as one of the most important things in the early How Scandinavian chronology, however unimportant that might be in the whole of musical history.

Originally titled "I Love You Björk, Marry Me!", this EP is in many ways the final “adolescent” How Scandinavian release that I made. Mainly composed and written during my junior year of high school, the six genre shifting songs are thematically linked by subjects that all were born from that period; youthful optimism, romance, uncertainty, disappointing friendships, and the well-earned dislike of the popular kids.

The EP also contains a sense of experimentation and exploration that I have grown very fond of in recent times. The hyper stream of change and information that was coming in during those late teenage days is captured by the song-by-song genre switching, and in hindsight seems like a subconscious move to adapt.

Although these themes (both lyrically and musically) are pretty much eternally coming and going around in my (and many others’) music, this would be the only moment in which it was addressed as directly as possible. There is a lack of metaphor throughout the record, and if I had gone a step further then I would be addressing people by name and street number.

With all the shifting friendships, a remaining year filled with closure for the teenage era, and the looming entrance into university, all I could do was address it as directly as possible. The result was the most reactive sounding record I ever made as a teenager.

"I was half in mind, I was half in need
And as the rain came down I dropped to my knees and prayed
I said "Oh heavenly thing please cleanse my soul
I've seen all on offer and I'm not impressed at all"

- The Style Council, "Shout to the Top!"

The early and continuing experiences of separating expectation and reality, first hand. A very acidic letter to old friends who drifted away. In hindsight, the subject matter and sound are a bit of a peek to what would be developed further later down the line. Probably my favorite opening track ever and borrows its title from a superb Harvey Danger lyric.

Subject matter being those old school daydreams of escapism, mixed with the early signs of reality crashing on top. This concept had been kicking around my head since I was in elementary school; the possibility of a foreign exchange gal that would sweep you away. For better or worse, that never happened.

Closest thing to The Fall I ever wrote in my life. I particularly like the cereal in the morning section. A very accurate representation of the high school growing pain years in a stream of consciousness style. References Steely Dan too!

The "fiercest" I got as a 17-year old. I had not really dived into "true" forms of heavy and fast music as I would the following year, but I gave it a shot (as it is apparent with this and the subsequent song). I thought to myself, "I'm pretty mad, so I'm going to repeat this dumb riff over and over in a fast way. That's how it works right?". In a naive way, it did.

Much like "Clamface", this was my juvenile attempt to make a "heavy" track. Point of reference for the vocals was Henry Rollins, and not really the Black Flag iteration, but more the Rollins Band in "Tony Hawk's Pro Skater 3" iteration. I believe the song was called "What's The Matter Man?". It's not very good. After adding about a zillion guitar overdubs, I figured I might as well go all out and brought the keyboard to do some nasty sounding 90's synth bass. Not exactly fast, but not a slog either. I quite like this song for how odd it turned out, it was revived for 2016 sets.

6. Not A Significant Source Of

A naïve foray into a twisted and compromised idea of synthpop. At the time, I did not know how to program drum patterns in DAWs or knew what a VSTi was, so this entire rhythm track was recorded live from my old trusty organ's rhythm machine. It kind of lends the track an ominous sound that is uneasy and nervous. With lyrics that deal with the sentiment of opposing the popular kids with their glancing judgement and exciting lives (I know better now), I wanted no backing vocals for the lone voice among the madness.

All songs written and recorded by Bryan Santizo between mid-2010 and early 2011.